CF is a life-shortening, inherited disorder for which there is no cure.

It affects the mucus-secreting glands of the body, primarily affecting the mucus in the bronchial tubes of the lungs and the small ducts of the pancreas. The pancreatic blockage causes inadequate digestion and food absorption leading to weak growth and malnutrition. Although CF is a multi-system disease, its effects on the respiratory system are the primary source of morbidity and mortality. In the United States, there are an estimated 30,000 individuals with CF, and approximately 1,000 new cases of CF diagnosed each year.

With advancements in research, people are not only living longer with CF, but they are living a more quality life. New therapies and specialized care is giving people greater control of their disease. We at the CFA recognize this and work hard to offer resources that will help make a living with this disease more manageable.

This is the remarkable woman who identified and named cystic fibrosis. 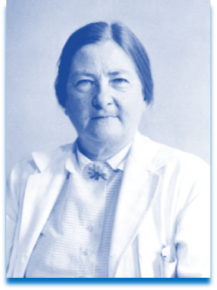 Dorothy Hansine Anderson was a pioneer in pediatric anatomy and pathology. During her research career, Dorothy Andersen studied many children who had digestive or breathing problems and also performed autopsies on those who died from these problems. In 1938, while performing autopsies she noticed many of the patients who had died from celiac disease had fluid-filled cysts that were surrounded by scars on the pancreas.  She also found similar scars and tissue damage in the lungs and came to the conclusion that the lung and pancreas damage came from the same disease which she called "cystic fibrosis of the pancreas." In 1942, Andersen developed the first efficient diagnostic test for cystic fibrosis with Paul di Sant'Agnese (who also worked at Columbia University) at Babies Hospital.  Read her remarkable story here.