The Cystic Fibrosis Association of Erie County (CFA) began its journey on May 3, 1965, when Lucille (Shea) Sullivan and Timothy Paul Sullivan (Paul) had a son Timothy (Timmy) who passed away at the age of 10, in 1964 with Cystic Fibrosis (CF). The Sullivan's hoped to bring public attention to this disease, realizing that early diagnosis and treatment could help keep children alive while waiting for a cure.

CF is a life-shortening, inherited disorder for which there is no cure. It affects the mucus-secreting glands of the body, primarily affecting the mucus in the lungs' bronchial tubes and the small ducts of the pancreas. The pancreatic blockage causes inadequate digestion and food absorption leading to weak growth and malnutrition. Although CF is a multi-system disease, its effects on the respiratory system are the primary source of morbidity and mortality.

("When their son Timmy was finally diagnosed with Cystic Fibrosis (CF) after years of his mysterious digestive and respiratory ills, Lucille and Paul were afraid they might not be able to afford the expensive medication that would keep him alive. A pharmacist in Cleveland, the location of the children's hospital that could treat CF, provided medicines at cost for any CF patient because he was the father of a CF child. Lucille and Paul were grateful and decided to extend that community of support to their home. They convened other families with CF children and started the CF Association of Erie, PA. Lucille organized volunteers to assist families, recruited donations, and gave talks to spread awareness of the disease to organizations like the Kiwanis club, to medical students, and to high school students.")

Lucille's anecdote about first officers of the association: From Elaine (daughter) July 12, 2020:

("The founding families gathered at the Sullivan's home and invited a reporter from the Erie Times to join them one evening. The reporter listened to their story and mission and then asked who the officers of the organization were. The members looked at each other with a collective, "Huh?" He said it would be a better story and serve their purpose if their picture had organizational titles. He pointed to Paul Sullivan and said, "You're the president." He assigned the other officer roles and captioned the picture for his article, while they trusted that he knew his business.

As I recall, there was no pyramid structure in that small group, and members focused on their common purpose of publicizing CF and assisting other families.")

1965 brought many positive changes; CFA had a successful drive for 200 Green Stamp books to purchase a 16 mm sound projector and screen to view films about CF and better acquainted the public of the symptoms, care, and life-preserving therapy used on afflicted children. That same year, the Red Cross trained "the Villa Girls" to do chest therapy for the children at St. Joseph's Home and children in the hospital.

Financial backing continued to grow throughout the years as numerous civic groups including, annual Balls at Rainbow Gardens by the Beta Sigma Phi, the Erie Bowling Association, the Catholic Charities of Erie, and the Welcome Wagon. General Electric and the Secretary Club gave a Christmas donation, and the Presque Isle Jaycees donated equipment.

The CFA members were a tight group, and they held annual picnics for the board, their families, and the CF children. They also held a Christmas Social and an annual Awards Dinner to recognize the people who gave chest therapy to patients at St. Joseph's Home for Children.

The struggles were real for the families with CF. Medical insurance did not pay for the equipment needed to keep the CF babies healthy. Mist tents and aerosol units helped the lungs take in more air. These treatments helped the babies cough up the mucus their bodies were continually producing. Life expectancy was short because there were no CF specific drugs and limited antibiotics. The costs were astronomical for the families as well as trying to understand and deal with the disease.

Children's Hospitals of Cleveland and Pittsburgh provided treatment for children. Due to the severity of CF and the hardship of the families traveling such a distance when the children became sick, in 1967, Conrado Recio, MD, started an outpatient clinic at Hamot Hospital in Erie, in association with the University Hospital of Cleveland. The purpose was to give monthly care locally, between the quarterly check-ups. It also provided expert diagnostic and testing to determine if new patients had the disease. Dr. Conrado Recio accomplished much work behind the scene with the help of Dr. Byers, and the Sullivan's.

The first known bylaw for the CFA appears on March 5, 1979, and they remain similar to those of today. We believe there were bylaws from the inception of CFA but have no documentation to verify this theory.

In January 1987, CFA reached a new milestone when the first known Direct Dollar Disbursement Policies (DDD) were adopted. This program transformed the CFA from being a mostly informational and treatment-based association to monetary and assistive. The DDD implementation, to this day, is a unique program and significant accomplishment of the CFA. Through this program, the association offers money to assist CF patients and their families in offsetting the high costs of medical bills, co-pay, and prescription medicines. The CFA provides quarterly funds to support the families in purchasing over-the-counter non-prescription needs. The CFA helps the patient's financial assistance for round trip expenses incurred with travel to CF clinics/hospitals. The DDD program provides financial relief for family members to stay at the hospital with their loved one by providing reimbursement for meals and hotel stays during a patient's hospitalization.

In 2009, an Anonymous Friend of the Erie community became the single largest donor to CFA with a tremendous gift of approximately 3 million dollars. This donation transformed the way association is able to assist CF patients and their families.

In late 2015, the first step towards the modernization of the CFA began with the dedication of Michelle Homan, Secretary. After a yearlong effort, a logo, design, and format for a CFA website were finalized and taken live.

In 2016, after much prodding from Carol Snyder, Secretary, the board approved and adopted coverage to include CF patients in Crawford County.

In 2017, Carol Snyder and Michelle Magee, DDD Chair, spearheaded the effort to take CFA computerized to make the association more efficient. Each board director received an Apple iPad, and the board began to scan and organize the historical documents. This process took almost two years. They organized, categorized, and implemented specific committees to streamline the duties of each member. Doing so made the workload of each individual on the board less burdensome, and with these new committees came real progress.

The year 2017, continued to be very productive as the newly formed Scholarship Committee began writing the policy. This program became another proud moment for the association to assist CF patients who were now living longer, healthier lives, becoming successful, productive adults, and hopefully relieving some of their financial burdens. On April 28, 2018, CFA was excited to offer a $3,000 annual scholarship to each CF recipient. In the first year, CFA provided scholarships to three students; Madison Teribery, Mariah Sturges, and Benjamin Dodds.

Katheryn and Evelyn Cage became the longest-standing directors of the association. They sat in various positions on the board to ensure the success of this fantastic association. They each married brothers' and each had one son born with CF. The sisters retired on August 18, 2018, after 33 years of volunteer service to enjoy their families.

To this day, the CFA continues as a group of unpaid volunteers with very little overhead. The volunteers work from home to make this association a success. The board holds bi-monthly meetings at a neutral location. Even though these practices are sometimes inconvenient, it frees up the association's money to be used directly for the benefit of the CF patients and their families. These awesome volunteers come from all walks of life. Some are retired, some work full-time, some have a family member with CF, and some have no affiliation to CF; they believe in the cause and eventual cure of this debilitating disease.

The CFA has grown tremendously and, over the years, has expanded its mission. CFA strives to ensure they meet the intent of their mission and bylaws and stay focused on the patients and families with CF. The specific objectives and purpose of the association are to help defray medical expenses and other CF-related expenses, provide an assistive support network, raise awareness of CF, offer higher education scholarship, and support the research for the cure of CF.

Until we find a cure. 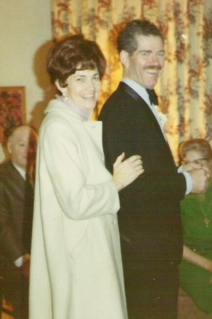 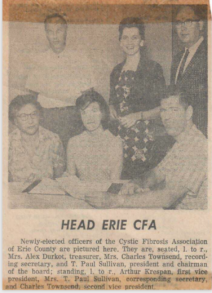 May 3, 1965 First Board of Directors Meeting 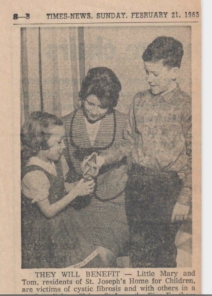 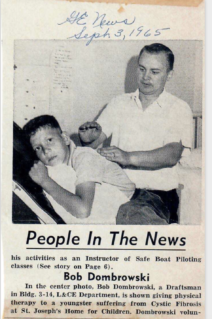 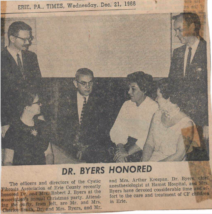 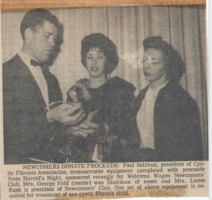 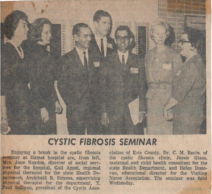 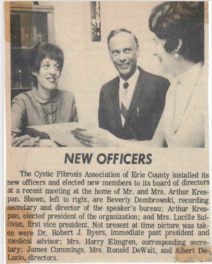 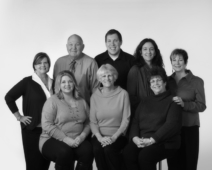